Tomorrow we’ll sing auld lang Syne, which isn’t an obvious time to go trail riding around Chichester, but there you go.

Finding an old trail bike, buying a new trailer, tinkering with both, getting them here with new riding kit to boot, went well, and though I only know Doris (DRZ) from having had her up on the bench, and around the block, I think we like each other.

Trail bikes are quite different from any other I’ve ridden, and my off-road experience amounts to a few laps around a few hay bails at the ATFF, nonetheless, the Trans Euro trail won’t ride itself. 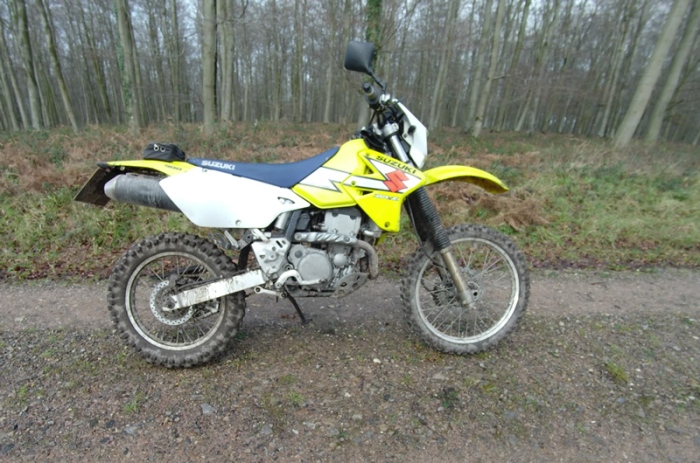 The TET starts in Albania and takes in Scandinavia, Spain and the UK, but today’s leg went across the South Downs.

Or would have if the route hadn’t been blocked by a fallen tree, forcing me off-piste. Nonetheless having a whole stable of ponies push you around muddy lanes in the middle of nowhere and midwinter distracts from map reading – and might that’ve been the call of the wild blowing in the wind.

The Downs have a surprising number of bridleways and rideable tracks, but the chalk’s slippery, either washed white by run off or covered in leaves at this time of year. Nevertheless it went well and we kept vertical, until a steep gully tripped us up.

She’s used to this and prepared, so the only casualty was my dignity, which made me grin

The funny thing is that for all the prep I’d not given much thought to being in the middle of nowhere, rubber side up with a flooded carb and weakening battery. If I had I’d of perhaps stayed home or at least made sure the sat-phone worked. The engine turning over forlornly in the middle of nowhere, and a few walkers ambling a few miles back down the track, were a reminder of the fragility of wellbeing and success, reminded me to be more mindful.

Suffice to stay it was only a  temporary attack of the vapours, and we made it back for a jet wash, jacuzzi, and a pint.

And surely ye’ll be your pint-stoup!
and surely I’ll be mine!
And we’ll tak’ a cup o’ kindness yet,
for auld lang syne.

Namaste and best wishes for a mucky New Year, if that’s what floats your boat.