In 2008 the BBC TV show Top Gear made a road trip around Vietnam. For some reason Clarkson gave Hammond a model Spanish galleon to take along. 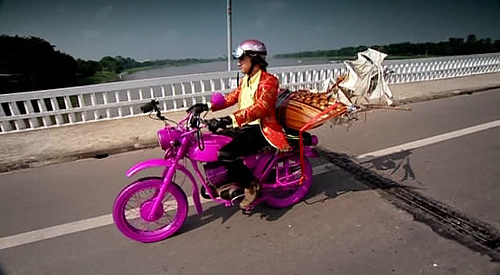 I think that might have inspired Grayson Perry to embark on a journey of atonement around Austria in 2010. Anyway, Grayson was accompanied by Alan Measles, his teddy and transference object, who enjoyed the ride from a kandylakia.

Both Grayson and Philippa, his psychotherapist wife, have talked about the symbolism and significance of that.

Gordon May’s book: “Overland to India” tells the story of the journey he made to Chennai in 2008 on a 55 yr old Royal Enfield. In response to being asked if he’d do it again, he said –
“At the drop of a hat… and I encourage everyone who has ever dreamed of doing the same to jump in with both feet! However, there are so many journeys…”

Gordon was in turn inspired by Greg Staves, who’d raised money for cancer research by riding from the arctic to the antarctic on another old Enfield twelve years earlier.

So my fantasy of riding back from India has many influences and references, each of which has been variously inspired, run and re-run through human psyches – grief seems to have fuelled many of these journeys.

The title of this post is taken from the film Nick Cave made to accompany his latest album. In it he talks about how, despite things appearing to begin and end, he believes existence and time are more concurrent than linear.

Our nature makes it hard not to perceive things as sequential and discrete, after all it’s really hard to mend a broken mirror, and isn’t creating illusions the core purpose of our perception? But beyond the limited “smoke and mirror” show that plays in our heads, I wonder if things might not actually be more connected, with events tumbling over and around each other in an endless flow that carries us along. I think that view accords with a Buddhist cosmic wheel, Taoist Wu wei, how Indian stories cycle endlessly through instalments, and a karmic notion of our deeds being ever present.

I wonder if journeying makes it easier to connect with the timeless flux – In the words of a Chinese proverb, “Don’t be afraid of moving slowly, be frightened only of standing still”. I’ve been thinking about another trip. One that might see tea parties held on the way back from India.

“And now in turn, you turn
You kneel, lace up his shoes, your little blue-eyed boy
Take him by his hand, go move and spin him down the hall
I get lucky, I get lucky cause I tried again
I knew the world it would stop spinning now since you’ve been gone
I used to think that when you died you kind of wandered the world
In a slumber ’til you crumbled, were absorbed into the earth…”